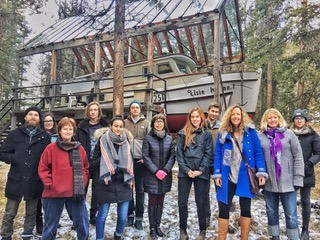 Your submission has been accepted for the Emerging Writers Intensive program. A maple-syrup sweet opportunity. In springtime I had sent my application, paid a small fee, and filed the attempt under probably won’t happen.

First-chapter novelists would be mentored by Madeleine Thien. Her most recent novel, Do Not Say We Have Nothing, was shortlisted for the Man Booker prize, and won the Giller and Governor General’s prizes for fiction. I read it twice, and also enjoyed works by the other facilitators: Wayne Grady’s Emancipation Day, Saleema Nawaz’s Mother Superior, and Elizabeth Phillips’ The Afterlife of Birds.

I learned a great deal in my week at the Banff Centre. Madeleine Thien encouraged us to be courageous, have confidence, and dare to see the novel’s big picture right from the beginning. Notes from the program’s other participants helped me shape and re-imagine my novel. I will always be grateful for this opportunity, and return to it for inspiration.

Links to works by a few other writers who participated in the Emerging Writers Intensive program in November 2016: